On Thursday, the Chesterfield School Board approved the superintendent’s number one budget priority: getting teacher salaries in line with national averages. The district got a financial boost from the county to help pay for phase one of the three year salary plan. But board members say there are still holes in the budget  the county could fund.

Board chair Ryan Harter explained the challenges in an interview with the Chesterfield Observer before the meeting.

“The School Board appreciates the county government’s latest outreach, which would further boost the local contribution to public education. This would result in a monumental $18 million local investment in our staff and students. However, it still falls short of the needs and requirements put upon us,” Harter said.

At last night’s budget vote, he echoed that statement:

“While the school board’s not in the position tonight to approve everything requested in the superintendent’s budget, we are thankful for the monumental $41 million increase in state and local funds that will support public education in Chesterfield County for this next year.”

The $41 million increase is the current amount over last year’s budget.

That $25 million number comes from a recent pay study the county approved, which ultimately showed how teachers were not on par paywise with national averages and also gave phases on how to implement a new pay structure, similar to one the county just implemented within the Fire and EMS departments.

The approved budget, if passed by the Board of Supervisors, would give immediate raises to over 4,700 classroom teachers, librarians, counselors and reading specialists.

When Daughterty unveiled his budget last month, his two priorities were teacher pay and “meeting the needs of our students and staff.”

“That’s the bottom line. We are not paying our teachers and our administrators the salaries that they deserve and the salaries at market value,” Daugherty said.

“Teachers will now have logical and reasonable steps to grow in compensation over their career,” Coker said. “Our teachers have long deserved this and I’m so excited we’re able to do that this year.”

Teachers begin their careers in the district at a certain pay scale, which for the most part, matched national averages. Over time, they received slight pay adjustments. However, after 10-15 years of work, their pay scale didn’t grow along with that national average--hence the “decompression.” So when many new teachers joined the district they were making the same yearly pay as teachers who had been teaching for over a decade. The “compression” part seeks to get teacher pay in-step with the national averages. 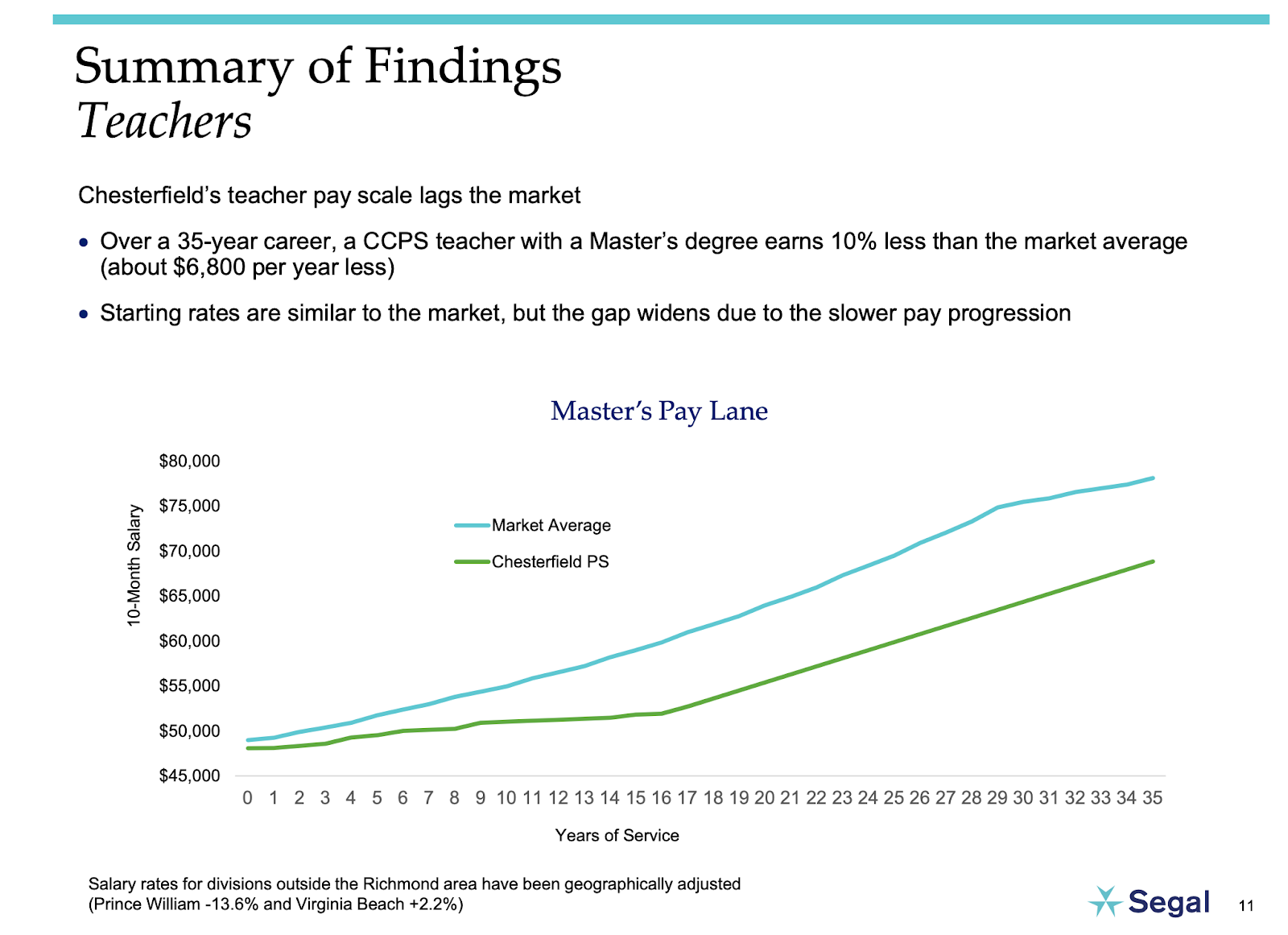 “Our teachers are our backbone. We owe them this. Everything that we ask them to do for our students and our schools and for our community,” Harter said.

Besides the success of the school board approving the budget, there’s still a long list of unmet and unfunded needs that the district will either have to ask the county for help on or scrap for next year.

The school’s budget could also change depending on county revisions or when the state finalizes its funding.

Already, the sudden enrollment declines due to the pandemic have automatically triggered budget reductions to a range of critical school programs in Gov. Ralph Northam’s proposed budget. The General Assembly is currently tweaking Gov. Ralph Northam’s budget, with an expected vote as soon as this weekend.

As for Chesterfield’s school budget -- that now heads to the board of supervisors, where it will be stacked alongside other county department budget requests, including those from public safety.

The supervisors are expected to vote on a final county budget in April.

stay connected to what matters.

Entertainment, inspiration and education from VPM delivered to your inbox.

Thanks to our sponsors